The Robots are coming. Are you ready?


The actors are acting. The director is directing. The robots are...shhh...don't tell anyone but the robots are on a smoke break. (You just can't get good help anymore.) 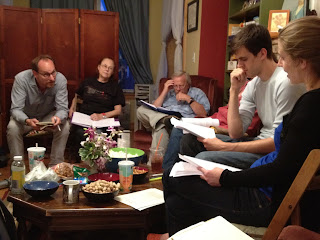 Yes, rehearsals are in full swing for Strangeloop's fall show, R.U.R.: Rossum's Universal Robots, and the futuristic, sci-fi world we are creating for you — where robots will type your letters and other lesser robots will clean up your streets — is A-MAZING. But in order to make this show "more than so much grass" we need GOOD help. We need your help.

Just a little further to go. Our Indiegogo campaign ends in less than 40 hours and we need you to help us meet our goal of $1,000. That money will make sure everyone comes out properly costumed with hats and robot bits all in place, that when a prop gun is needed that prop gun appears (instead of a piece of gun-shaped aluminum foil) and that actors aren't forced to rehearse in cardboard boxes (because we couldn't make rehearsal space rent). Plus, everyone knows, robots ain't cheap.

As a 501(c)(3) not-for-profit organization, your tax deductible contribution, whether it's $5 or $500, will help us pay for production costs. We cannot wait to bring this show to you, one we know will be a crowd favorite, but we need your help to make it happen. Click here to support the show.

You can also support Strangeloop and the robots in other ways. Help us spread the word about the show and invite your friends, family and even your frenemies. Point them to our Facebook Event for all the details. And while you're all on Facebook, make sure you check out our Robot of The Day and share your own robot-related news. You can also buy your tickets in advance at Brown Paper Tickets. And finally, make sure you hug a robot today. You might not think it to look at them, but all they really want is a little bit of love.

The robots take the stage September 7 through Octobert 6, 2013, with discounted preview performances on Sept. 5 & 6 at 8 p.m. on Thursdays, Fridays and Saturdays and 2 p.m. on Sundays at The Side Project Theatre, 1439 West Jarvis Ave., Chicago.

See you on old Rossum's Island!

We beg to remain, for Strangeloop Theatre. Yours truly.
Posted by Unknown at 11:24 AM No comments: 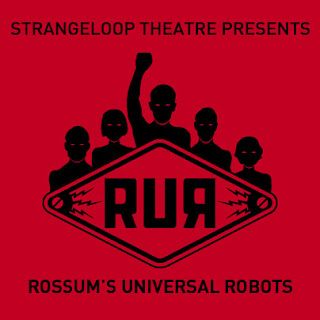 In 1921, Čapek introduced the word "robot" to a world still recovering from the ravages of war and built around it the concept that humankind would bring about its own destruction. In the play, the idealistic young Helena Glory arrives at the remote island factory of Rossum's Universal Robots, on a mission to liberate the robots. Old Rossum’s robots are not the mechanical men and women that later science fiction works would take up, but humanoid beings streamlined by man and biological in nature. So human-like, that Miss Glory has trouble telling man from machine. Not surprisingly, things do not go as planned — neither for Miss Glory, nor for humankind once the robots realize they actually are more than “so much grass.”

Still relevant today, R.U.R.: Rossum's Universal Robots examines what it is to be human and robot, and what it means to love.

Intimately staged at The Side Project Theatre in Rogers Park, R.U.R. runs September 7 through October 6, 2013, at 8 p.m. on Thursdays, Fridays and Saturdays and 2 p.m. on Sundays. Preview performances begin on September 5.

Tickets are $18 for general admission and available online at Brown Paper Tickets. Discounts are available for students and senior citizens. Season passes are also available.
Posted by Unknown at 11:40 AM No comments: