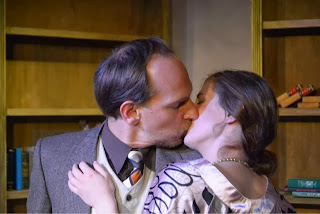 The robot revolution is nearing the end. It's the final weekend for Strangeloop's R.U.R.: Rossum's Universal Robots. The show closes Sunday and then the robots will pack up their synthetic suitcases and march off into the past.

But they're not gone yet. You still have four chances to see the "dark dystopic comedy" that the Chicago Tribune praises for its "sly wit."

Set in a not-too-distant future, R.U.R.'s world is one in which humanoid robots have been built as the new slave labor for humans determined to find cheaper and cheaper ways to make their products and to do the jobs that no one wants to do. Enter the bewitching Helena Glory, who has arrived at Rossum's island factory determined to find out if robots have a soul and to lobby for their liberation, upsetting the status quo. There's some love and romance mixed in there too for good measure, but not in the places where you're expecting. Written by Karel Čapek in 1921, R.U.R. teaches us about what it is to be human and robot, and what it means to love.

Tickets are $18 for general admission and available online at Brown Paper Tickets. Industry, student and senior citizen discounts available.
Posted by Unknown at 12:48 PM No comments:

The R.U.R. Reviews Are In


The robot revolution is well underway and the reviews are rolling in. There may be nothing harder to love than a robot, but audiences are responding warmly to the human drama that unfolds before them — both the tragic and the tragically funny — during Strangeloop Theatre's production of R.U.R.: Rossum's Universal Robots. You have one weekend left to see the "dark dystopic comedy" that the Chicago Tribune praises for its "sly wit."

“Karel Capek's 1920 play introduced the word "robot" to the world, but productions in the cyber age remain relatively rare. Strangeloop Theatre's take, directed by Brad Gunter, has many moments of sly wit that underscore Capek's all-too-relevant observations on the value (or lack thereof) placed on human labor…The ensemble finds the right mix of sardonic and feckless, the key ingredients making up the brain trust of doctors and engineers behind R.U.R.'s creations. Matthew Lloyd's Dr. Hallemeier sips brandy and whips out raised-eyebrow bon mots with machinelike efficiency, while Rory Jobst's Dr. Gall exudes the single-minded exuberance of a socially awkward science geek.”
— Chicago Tribune

“If you are looking for some classic scifi ancestry, though, this is a good show to check out. As with many early such stories, the science is thin and subverted to the purpose of the larger social commentary, but it’s good fun all the same.”
— Chicago Theater Beat

“The production was very enjoyable. The set was well designed for such a small space and really created an atmosphere…James Sparling as Harry Domin really carried the show. He was very natural in his role as an intellectual elite and pulled off the slightly absurd comedy in the piece.”
— Chicago Theatre Review

Tickets are $18 for general admission and available online at Brown Paper Tickets. Discounts are now available for students, senior citizens and industry. Season passes are also available. A limited number of discount tickets for the general public also are available on Goldstar and Hot Tix. 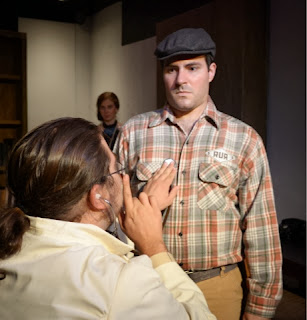 Want to know more about the philosophy behind Strangloop's production of R.U.R.?

Read Theatre In Chicago's article on the making of our show, The Nuts and Bolts Of The Future: Looking Back on R.U.R. (Rossum's Universal Robots) . Mary Shen Barnidge takes a peak at how we take our human actors and turn them into human-looking robots. (Hint: It does not involve aluminum foil.)

See the robots in person at the side project theatre in Rogers Park through Oct. 6.

Posted by Unknown at 3:02 PM No comments: