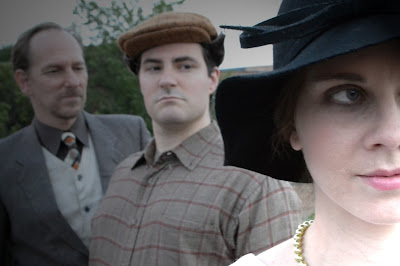 The paint is drying and the last of the trousers are being hemmed. Tech week is underway for R.U.R.: Rossum's Universal Robots as we put the finishing touches on our fall show.

Set in a not-too-distant future, R.U.R.'s world is one in which humanoid robots have been built as the new slave labor for humans determined to find cheaper and cheaper ways to make their products and to do the jobs that no one wants to do. Enter the bewitching Helena Glory, who has arrived at Rossum's island factory determined to find out if robots have a soul and to lobby for their liberation, upsetting the status quo.

Tickets for the full run are $18 for general admission and available online at Brown Paper Tickets. Discounts are available for students and senior citizens. Season passes are also available.
Posted by Unknown at 11:20 PM No comments: