The Strangeloop: a theatrical experience! 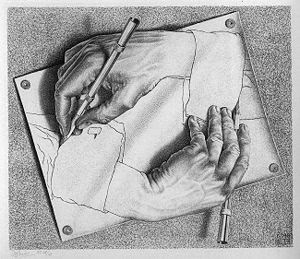 A tangled hierarchy is an appropriate way to describe Strangeloop Theatre. Strangeloop Theatre has established itself as an artistic entity with a lack of clear hierarchical structure. There is no artistic director as in most theatre companies. We have instead opted for a conciliar model with an administrative board of eight people (an unthinkable size for most young theatre companies!), and artistic decisions are made by the company as a whole. Our name, Strangeloop Theatre, was decided upon as the result of a very large and very long meeting with the artistic members of the company (plus lots of drinking).

Another point worth mentioning, a strange loop by its very nature is self-referential. By happenstance all of Strangeloop Theatre's artistic endeavors have included an element of the meta-theatrical. Our meta-theatrics, a play making reference to itself and calling attention to the instrument of theatre during the act of putting on a play, are often utilized in the person of a narrator. Come see The Millionaire Farmer for our most thorough use of a narrator yet! Meta-theatre can also be attained through the use of a very stylized theatre (Welcome to the Moon and other plays by John Patrick Shanley) or the direct address of the audience (New Works Workshop specifically "L Stories").

Strangeloop Theatre, true to its tangled hierarchy, has not yet made this a conscious choice in our theatrical endeavors. To see if the trend continues you will just have to stay tuned!
Posted by Unknown at 8:21 PM No comments:

Welcome to Gina and Erin! 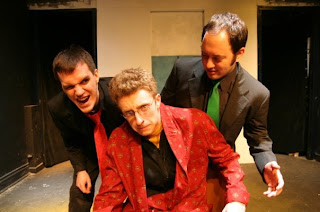 This picture pretty much says it all! Millionaire Farmer is definitely up on its feet and running. The audiences this week have been steady and quite appreciative. I'd like to give a shout out to the artistic team from Halcyon Theatre who filled up a good chunk of the audience last night! Seriously folks if you have not seen their work check it out.

Tonight we are adding some more fun and frivolity to the mix. Gina Nicewonger and Erin Rigik will be treading the boards as the understudies for Shannon Bracken and Jill Rafa. We should have some exciting new energy to the show this evening. If you are reading this, and thinking of joining the audience tonight you will be in for a special treat!
Posted by Unknown at 4:32 PM No comments: 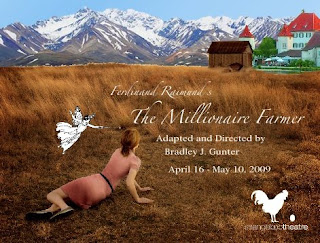 THE MILLIONAIRE FARMER by Ferndinand Raimund

Cursed at birth, the fairy maiden Anna is banished to earth to be raised by a farmer. Only by marrying her true love – a poor fisher – by her eighteenth birthday can the curse be broken and Anna be reunited with her mother. But her adoptive father has come into a mysterious fortune and now refuses the match. With the deadline approaching, Anna discovers that she has the help of magical friends, and that there are wicked forces manipulating her father. Can Anna find Contentment and break the curse, or will she succumb to the awesome power of Greed and Hate?

With a magical story encompassing the worlds of farmers and fairies, humans and allegorical figures, The Millionaire Farmer examines the theatricality in life and art and explores the relationship between the story and the telling. Utilizing music, improvisational comedy and multimedia presentation, Strangeloop offers a contemporary perspective on this timeless morality play, while maintaining the heart and humor that have made this fantasy a well-loved classic with European audiences for the past two centuries.
Posted by Unknown at 7:31 PM No comments:

A greeting to the Bloggosphere!

Just one week ago Strangeloop Theatre loudly proclaimed its existence with the opening of The Millionaire Farmer. Our premiere fully staged production runs Thursday-Saturday (8:00 PM) and Sunday (2:00 PM) until May 10, 2009 at

This production has been over a year in the making beginning with our first reading of the script, adapted by our illustrious director Brad Gunter, in March of 2008. We hope that everybody will be able to come and join us for the fun and frivolity!
Posted by Unknown at 7:15 PM No comments: