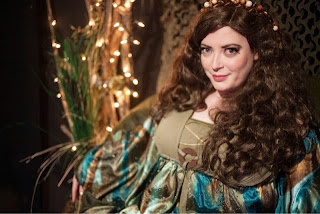 As an actress who has been on stage since she was 5, Avondale/North Center resident Caitlin Jackson has played everyone from Abigail in “The Crucible” to Bette Davis in Hell in a Handbag's production “Christmas Dearest.”

But for her latest turn on stage, she has stepped into not just one, but two roles from out of mythology. In her third production of William Shakespeare’s “A Midsummer Night’s Dream,” Jackson has taken on Hippolyta, the famed Amazon Queen who lost a war and her heart to Theseus, as well as the Fairy Queen Titania, whose eternal battle for love and supremacy with her Fairy King, Oberon, puts them in the path of four young lovers lost in the woods outside of Athens.

Read more about Caitlin, including her work in Strangeloop's A Midsummer Night's Dream in the NorthCenter-RoscoeVillage Patch.
Posted by Unknown at 4:05 PM