Wagman rolls up his sleeves, slips on a donkey's head for iconicShakespearean role 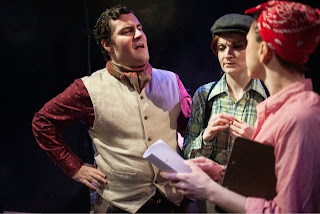 Wicker Park actor Michael Houghton Wagman loves that his neighborhood is developing into its own theater district in a city filled with storefronts and stages.

But Wagman’s latest project – taking on the iconic role of Bottom in William Shakespeare’s “A Midsummer Night’s Dream”with Strangeloop Theatre – has taken him a little further afield, up to a small performance space in Rogers Park. The trek north for the actor has been worth it, however, to take on a role that is known for its heavy comedy, but also much subtler shades of introspection, passion and joy.

Read more about Michael, including his thoughts about Bottom in Strangeloop's production A Midsummer Night's Dream in the Bucktown-Wicker Park Patch.
Posted by Unknown at 1:38 PM