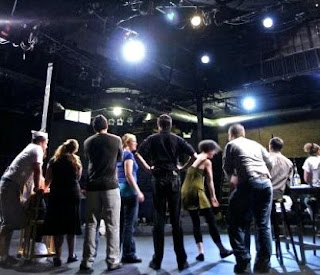 That's right folks this summer we will be premiering Strangeloop Theatre's third evening of original works! We have come quite a long way and are very proud to have made Loopshop the cornerstone on which the rest of the Strangeloop experience has been built.
Come join us for Loopshop 3 at Prop Thtr, 3502 N. Elston , on July 13 and 14 at 8pm!
Just a little background... Loopshop (then called Strangeloop's New Works Workshop) premiered in February of 2009 at American Theatre Company with four plays written by Strangeloop company members. It was messy and amazing. One night, one day in the space, in out done. The fantastic reception that we received from our first Loopshop event prompted us to expand the project and revisit the idea of an evening of original works.
In August of 2009 Strangeloop premiered six plays with two performances under the brand new name of Loopshop! These six plays were a combination of pieces written by company members and pieces written by affiliated artists. The performance took place at Stage Left Theatre and nearly sold out both nights!
One of the pieces was Dustin Spence's The Sound of a Yellow Flower was performed as a twelve minute scene with actors Megan Martinez and Ian Maxwell under the keen direction of Leigh Barrett. The Sound of a Yellow Flower will be performed as Strangeloop Theatre's fully produced Fall 2010 production at Trap Door Theatre where Megan will reprise her roll as Natalia and Leigh will lighting design. It is this sense of creation and collaboration that has propelled Strangeloop Theatre to its current place within the Chicago theatre community and we hope for much more in the future.
Loopshop 3 will be premiering seven original works all by playwrights outside of the company! The line up is as follows: Protected by Mark Pracht, director Mark Pracht; The Weight by James Thomson, director Zack Florent; Waterproof by Paul Barile, director Doug Long; Reserving Departure by Barb Lhota, director Jesus Contreras; Crisco vs. Olive Oil by Michael Wagman, director Lance Hall; Life of an Intelligent Guard by Megan Mackie, director Bradley J. Gunter; Elevator by Anthony Ellison, director Shannon Bracken. Strangeloop Theatre is so excited to be working with so many talented artists!
Tickets for Loopshop 3 will be available soon along with many other exciting Strangeloop Theatre events. Stay tuned and come join us for all the fun in 2010!
Posted by Unknown at 6:01 PM